Hundreds of lifesavers from the emergency services descended on Ironbridge Power Station today as the RAF simulated an aircraft disaster as part of a major training exercise. 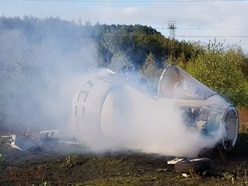 The cooling towers were surrounded by firefighters, police officers, paramedics and military personnel as they rushed to the scene of a staged crash between an RAF jet and helicopter, the largest joint-agency training exercise since 2017.

The exercise saw 'members of the press' laid on by the RAF's media team arrive on scene while the area was cordoned off and fire engines followed ambulances to the crash sites.

Aircraft crash exercise well underway at #IronBridgePowerstation working with the emergency services @shropsfire @OFFICIALWMAS. It is an exercise. Don’t be alarmed by high volume of emergency vehicles. pic.twitter.com/gOG9IsD8ob

"Large-scale exercises like this involve hundreds of people, take more than a year in planning and take place every two years" pic.twitter.com/oIRX4OACZF

Emergency services have cordoned off the area and are dealing with the 'casualties' from the helicopter wreckage pic.twitter.com/vJPIzSdjy0

I'm at the Ironbridge Power Station where the RAF are working with the emergency services on a major training exercise to respond to a jet and helicopter collision pic.twitter.com/UXObVuKGG3

After a year and a half of planning, Shropshire Fire & Rescue Service, West Midlands Ambulance Service, the RAF, West Mercia Police, mountain rescue teams and investigation officers came together for the two-day exercise to work as one team and deal with a number of real life emergency situations that would arise if a major incident occurred.

The entrance to the Buildwas Power Station was cordoned off by police as the wreckage from an overhead collision spread across two separate crash sites on land surrounding the cooling towers, and boats patrolled the nearby River Severn looking for debris and working to mitigate the environmental effects of the crash.

RAF Cosford Squadron Leader Chris Wilson said the emphasis of the exercise was working to the worst possible scenario, and the power station, set to be demolished before the end of the year, provided the perfect setting.

"Flying is very safe and we take flight safety very seriously, but we also have to practice every possible scenario and this scenario is possible – albeit highly unlikely," he said.

"For that reason we do this every two years. Some people have to know the specific details far in advance but a large number of people involved will turn up and say, 'what situation do I need to deal with here and how am I going to work as a team to tackle it'.

"This site started to be recced at least a year ago. It's a brilliant place to do it because there's a large space away from the public. The towers are coming down fairly soon so we got in just before that as well."

The cockpit of a fast jet RAF aircraft and a military-grade helicopter were delivered to the site on Tuesday evening and debris was scattered across fields to replicate a real life collision.

Teams of rescuers from various agencies saved casualties trapped under sheets of metal and removed injured pilots from their cockpit.

Kevin Faulkner, area manager and head of delivery for Shropshire Fire & Rescue Service is the level four incident commander that deals with the largest and most complex emergency situations.

Explaining his role, he said: "At a major incident or incident of this size, our operations scale up accordingly, so it'll start with a level one commander and move through as the incident becomes more and more complex or large to a level where we've got the appropriate command skills."

He added: "The greatest skill we're gaining is the ability to work as a multi-agency response team. The Joint Emergency Services Interoperability Principles (JESIP) programme allows us to have a common operating picture, common understanding of risk and set common priorities – we work very closely together to give the best possible response as joint agencies rather than working in silos which tended to be the case many years ago."