Flood barriers go up in Ironbridge as county remains on alert

Flood barriers were going up in Ironbridge this afternoon as the recent wet weather continued to effect Shropshire and Mid Wales today, with flood warnings and alerts in place in the region. 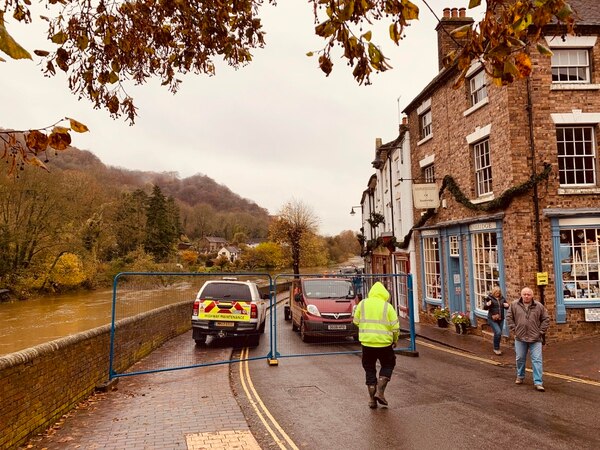 The Environment Agency said specialist teams would be out in Ironbridge this afternoon, putting up the temporary flood barriers.

It added: " Local road closures in place. Town very much open for business!"

Our specialist teams will be out at #Ironbridge this afternoon, putting up the temporary #flood barriers. Local road closures in place. Town very much open for business! #floodaware #PrepareActSurvive pic.twitter.com/B08R4cg6rk

Former borough councillor Nicola Lowery was on site as the road was closed just after 12 noon and said :”The Wharfage in Ironbridge is now closed to vehicular traffic as the flood barriers are being deployed by Telford & Wrekin Council and the Environment Agency as river levels continue to rise.

"It was a quick response from our teams and I would like to thank all of the officers involved for their hard work in keeping our communities safe”.

The Wharfage is now closed as the Flood barriers are being deployed by @TelfordWrekin @EnvAgency as river levels continue to rise. A quick response from our teams and many thanks to all involved for their work in keeping our communities safe👍 pic.twitter.com/NAlrtyy0ZN

Can you come and bring yer aqua mower plz Mr Mower chappie @mowermanjimmy and sort this lot out so the dogs can play ? #daleendpark pic.twitter.com/NuQ79f09Ac

Meanwhile, today's weekly Shrewsbury parkrun has been cancelled because of flooding.

Oh laws, the Serven in #shrewsbury is a bit feisty today! #floods pic.twitter.com/4qZS4kHMRX

What to do when the river is too high for getting the boats out.... Club ergo racing! Adapt, improvise and overcome haha #rowing #Shrewsbury #Flood #Shropshire pic.twitter.com/3dP3DhFYED

At Leintwardine, just over the Shropshire border with Herefordshire the River Teme reached its highest recorded level on Friday morning, exceeding the summer floods of 2007.

The power of the River Teme in flood between Knighton and Leintwardine was captured in this video by Gareth Lloyd.

On your patch today. This was the Teme between Knighton and Leintwardine at 1130am pic.twitter.com/B4pQ7IhHXE

Mr Lloyd also captured this image of the river at Clungunford.

Firefighters in Presteigne were called to help rescue a motorist who ignored the road closed sign and got stranded in floodwater at Combe Corner.

This evening 17P1 alongside our colleagues from @HWFireLeintwdne @Hayfirestation @HFDfireservice mobilised to car stranded in flood water at combe corner 1 casualty brought to safety using inflatable rescue sled.The road closed signs are there for a reason. pic.twitter.com/mvlYqoD9Ls

Flood warnings - meaning flooding is expected and immediate action is required, were today in place for :

Flood alerts - meaning be prepared, flooding is possible - were in place for:

Parts of the country could still be affected by flooding through to Tuesday, according to the Environment Agency (EA).

In a forecast of the flooding risk in England and Wales, the EA states: "River flooding is expected to continue in the Lower River Don washlands area in South Yorkshire through to at least Tuesday, where properties will continue to flood and there will be continued travel disruption.”

It comes as 79 flood warnings and 111 flood alerts were still in place in England by Saturday at 11.10am.

The EA states that river flooding is expected for Evesham in Worcestershire on Saturday and residents should be braced for properties to be affected and travel to be disrupted.

It warns that local river flooding is also "possible” in parts of South Yorkshire, Lincolnshire and parts of the Midlands until Monday, and in Oxfordshire on Saturday.

Communities in parts of central and northern England were cleaning up after being overwhelmed with water following torrential rain in recent days.

The Met Office said that most of the southern UK and Scotland is set to stay dry with sunny spells while some heavy showers are expected in the far west of Wales and Cornwall on Saturday.

The EA for Yorkshire and the North East said there was still lots of flood water in the region where a pumping operation is under way to reduce water levels.

In an online message Martin Christmas, of the EA, said: "We are starting to think about moving from emergency rescue response into recovery and that means looking at our flood warnings and then starting to think about all the inspections we need to do to look at potential repairs for banks and flood assets based on the loading they have received from the water in the last week.

"We have still got tens of people out there in the field carrying on with pumping activity trying to get levels at Fishlake reduced and we are also keeping an eye on East Yorkshire as well.”

The Met Office said its Sheffield weather station has recorded its wettest ever autumn.

There is also  a "risk of seeing a very cold start” on Tuesday, according to Met Office meteorologist Sophie Yeomans.

She said: "It is still quite chilly this weekend and we will all have some chilly starts. Tuesday will probably be the coldest of the starts.

"For Sunday morning most places will be under the cloud and rain so Wales and northern England will probably be seeing about 5 to 6C overnight.

"Then across southern England where there are clear skies many places will probably drop to a little below zero to minus 1C or minus 2C in countryside areas.

"This would make it the coldest night of the autumn so far.”