Fire crews have attended 88 incidents at an MoD base near Telford in the last year, including incidents where a cigarette, an e-cigarette and burning toast triggered alarms. 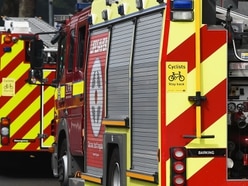 Figures obtained from the Ministry of Defence under the Freedom of Information Act show there were 17 first aid or medical cases and three flooding incidents at MoD Donnington between November 2018 and November 2019.

In all cases the Defence Fire and Rescue Service – which specifically protects British military assets and operates independently of regular fire brigades – sent one appliance with a crew of five.

‘Fire’ is listed as the cause of just two call-outs, while ‘smell of gas’ and ‘water on electrics’ account for two more.

An Army Secretariat statement said: "There were 88 incidents between November 1, 2018 and November 4, 2019. All incidents were attended by the Defence Fire and Rescue Service."

It added: "Shropshire Fire and Rescue Service were neither informed nor attended.”

Eighteen cases at the base, which has been housed at the Donnington site since 1936, were recorded as ‘fire alarm, good intent’, and the remaining 15 were attributed to technical errors.

Just after 10am on Thursday, April 4, ‘burnt toast’ led to the DFRS attending.

‘Burnt out dryer wire’ caused an alarm just before 6.45am on Saturday, February 2, as did ‘steam/laundry’ at 10pm on Thursday, June 6.