Work to alleviate Albrighton flooding hotspot set to start in 2020

Blueprints that aim to alleviate one of the county’s worst flooding hotspots have been drawn up. 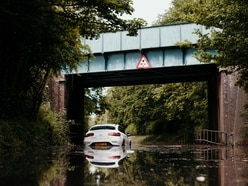 Albrighton has been blighted by flooding for years with countless drivers falling victim to large swathes of stagnant water lying across its roads.

The Ministry of Defence, Network Rail and Shropshire Council’s dedicated flood team have been working to create an action plan which is now set to be implemented in the New Year.

In particular, the focus has been on the frequently affected road running underneath the railway bridge just off the A41, which acts as the main entrance and exit into the village.

For years motorists have been forced to use narrow country lanes or risk getting stuck.

Earlier this year former Wrekin MP Mark Pritchard criticised Shropshire Council for not taking action after receiving numerous complaints from members of the public, including some who live in nearby Cosford and struggle to get their children to school.

The council’s highways and flood and water management teams said the cause of the issue is a result of the poor condition of downstream pipework as part of the highways gully system. Investigations found roots from the trees that line the rail embankment had caused blockages.

John Bellis, Shropshire Council’s drainage and flood risks manager, said: "Shropshire Council’s flood and water management team recently met on site with Network Rail and the Ministry of Defence to review the proposed works to alleviate the flooding affecting the A41 Newport Road in Albrighton.”

"During the meeting the scope of the works was discussed and approved in principal by all parties.

"Shropshire Council’s engineering services are working with the contractors to agree a time frame for these works to take place, and it is hoped that it can be delivered in the New Year.”