Happy travellers Chris and Marianne Fisher are getting into gear for the drive of their lives - they are setting off around the world in their camper van. 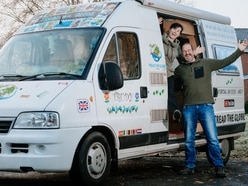 The couple from Telford are making preparations for their latest adventure which will see them visiting as many countries as they can by road.

Tread The Globe travel bloggers Chris and Marianne decided to travel the world last year and after buying the camper van nicknamed 'Trudy'. In it they have since travelled across Ireland, France, Belgium, Holland, Germany, Spain, Andorra and Portugal as part of their vow to do something that they really wanted to do with their lives.

After that initial trip last year, they have been backpacking across Central America in a journey that took them to Spanish-speaking Costa Rica, Panama, Nicaragua, Belize, El Salvador, Guatemala, and Honduras before coming home to plan for their new road adventure.

Chris, 48, says: "Our challenge is to visit every country in the world before we die, either with the van or backpacking.

"When we started 18 months ago we did 12 weeks in Ireland.

"After that, in January we back packed in Central America to all the countries that Ross Kemp visited for his TV series and tells you not to visit. But if you plan in advance you can visit all these places. We have a great time meeting people seeing the attractions and meeting the real people. We make friends on the way and whole communities took us in, inviting to festivals, weddings and meals."

Marianne, 51, says: "We were in Central America for five months. We went volcano boarding, which is like sledding, in Nicaragua and had a go on a zip wire. The Mayan temples were beautiful and we went diving in Yutila, in Honduras."

Chris says: "We returned in July to prepare for the next chapter of our adventures which is 'can we drive our 15-year-old van around the world?'. Since then we have been applying for visas, carrying out navigation research and route regulations, drone regulations in different places because we have a drone.

"We have just had our Russian visas arrived after a four-week wait."

In the new year on January 4, they will hit the road for approximately 20 months aiming to drive round the globe taking in southern France, Italy, Slovenia, Croatia, Bosnia and Herzegovina, Montenegro, Albania, Greece, Turkey, Georgia, Russia and Mongolia. The former NHS managers say they plan to sail to Australia via South Korea depending on shipping costs, however, if the budget is too tight they will sail from Vladivostok, Russia, to San Diego, United States, instead.

There will be an open house bon voyage party on January 3 at the Ugly Duckling pub, in Long Lane, Sleapford, from 4.30pm until late. Well wishers are welcome to bring campers vans, but must book parking bays with the Fishers. The following day they will embark from Ironbridge at about 11am.

They help fund their trips by posting their own videos on YouTube and through a website. Sponsorship for the round the world trip has so far come from A Plan medical insurance, Auto.term.co.uk, DFDS Ferries, a donor has provided £600 for special tyres.

To help them on their way visit: