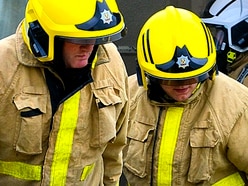 At about 5.20pm on Monday a fire was reported at Park Road in Donnington, Telford.

One crew was sent and they used a ladder, buckets of water and chimney rods to extinguish the fire.

Just over an hour later another chimney fire was reported at a home in New Street, Wem.

Another fire crew from Wem used buckets of water and chimney rods to make the building safe.

Then, at about 8.30pm, the fire service was called to a blaze involving a log burner and chimney in the living room of a two-storey house in Weirbrook, West Felton.

A fire team from Oswestry used their equipment to put out the fire and then a thermal imaging camera to check for hotspots.

The fire service advised anyone with a working chimney to sweep it twice a year and only to burn seasoned logs.

We attended another three chimney fires last night in West Felton, Oswestry, Wem, and Donnington Telford. In the cold weather please take care with log burners and open fires. Please ensure that you have your chimney swept at least twice a year and only use seasoned logs. pic.twitter.com/AWbA8afXlj