Telford MP Lucy Allan has called for a parliamentary debate into the "national scandal" which saw a Shropshire post office worker jailed because of a computer glitch. 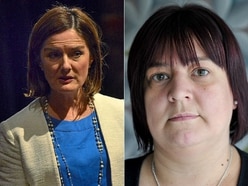 Ms Allan raised the case of Tracy Felstead, who was a 19-year-old post office clerk when she was jailed for six months in 2001 after being convicted of stealing £11,500.

Miss Felstead, from Bournside Close, Brookside, Telford, was one of 550 former post-office workers now in line for a share of £57.75 million compensation following a long-running case in the High Court.

But it is feared that this figure could fall to as little as £10 million once legal costs have been taken into account, meaning the claimants would receive an average of just £18,000 each.

Miss Felstead, along with former Shrewsbury sub-postmistress Rubbina Shaheen, who was jailed for 12 months in 2010 for false accounting, is now trying to get her conviction overturned.

She said: "Just before Christmas, the Post Office made a settlement with 550 post office workers, including my constituent Tracy Felstead, who was imprisoned at age 19 in Holloway Prison after her till did not balance due to a technical glitch.

"May we have a debate in government time to consider what is fast becoming a national scandal?"

Mr Rees-Mogg said he was concerned about the situation, and said those who had been falsely accused should be properly compensated.

"I share my honourable friend’s concern that innocent people seem to have suffered because of IT flaws within the Post Office systems," he said.

"That is entirely wrong and improper, and they ought to be compensated fairly. I think an adjournment debate or a Westminster Hall debate would be very suitable."

The High Court heard how the Post Office staff, mostly branch sub-postmasters, were wrongly blamed for financial discrepancies which had been caused by a glitch with the company's Horizon computer database.

The Criminal Cases Review Commission is to meet on March 24 to discuss whether Mrs Shaheen, Miss Felstead and others should be granted leave to appeal their convictions.

Mr Justice Fraser found in favour of the former Post Office workers in the first two of four proposed trials in the High Court, but the proceedings were brought to an end when the Post Office agreed to pay compensation in an out-of-court settlement.

Another judge, Mr Justice Coulson, accused the Post Office of treating its staff "in capricious or arbitrary ways which would not be unfamiliar to a mid-Victorian factory-owner”.

The Justice For the Subpostmasters' Alliance, which brought the group action in the High Court, has called for the Government to pay the legal fees in the case.