More than £2,500 has been raised by Father Christmas and his band of elves around Newport in just a week. 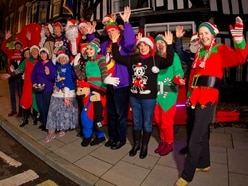 The money, which was raised from the sleigh going around Newport, Edgmond and Lilleshall, will be given to the X-ray appeal.

The fundraising appeal was launched to upgrade ageing X-ray equipment at the town's Wellington Road Surgery.

The upgraded equipment will still be based at the Cottage Care Centre off Upper Bar, but will be in line with state of the art digital technology being installed at Telford's Princess Royal Hospital and Royal Shrewsbury Hospital.

The event will continue until December 21 and has been organised by Newport Rotary Lite.

Andy Butler, the event's chief elf, said: "We’re delighted by Santa’s bumper start. He began well at Waitrose and he’s received a brilliant welcome so far. People are putting in what they can afford, whether it’s small change or even the odd £20 note. I think it helps when people realise it’s Rotary and for the fabulous Newport X-ray appeal – they know every penny we collect will go to the appeal.

"What’s just as important for us is the smiles and laughs we’re getting from a huge range of people. You get the feeling that people appreciate a little Christmas joy in their lives, especially when they know it’s people from the Newport area trying to help.

"We’ve had some great reactions. Obviously children are excited and parents are pleased, but we’ve had cars stopping to give us money, teenagers and students donating, and lovely reactions from elderly people – I think Santa’s oldest fan so far was 90.

"And Santa’s given us some great news this week – he’s now visiting Tibberton on Sunday, December 15. He’ll be outside the Sutherland Arms from 12.30pm until 2pm. He’s had so many requests for a visit to the village he’s going to make a special visit there.”

"Please have look at the route and come and meet Santa and his elves – and help the X Ray Appeal while you’re at it.”

On Wednesday (11), Santa and his elves will visit Chetwynd Gate, Carnival Close, Avenue Rd, Audley Park and Underhill Close, while on Thursday he will visit Broadway, Meadow View and Barnmeadow Road.

On Friday the sleigh will come to Gravelly Drive, Sandiford Crescent, Moorland Road and High Land Road, while on Saturday it will be at Heathwood Road, Ford Road, Leigh Road and Stretton Ave.

On Sunday he will be at the Sutherland Arms in Tibberton from 12.30pm until 2pm. On December 16, Santa will visit Wenlock Drive, Wrekin Ave, Hawkstone Ave and Ellesmere Court, followed by Brookside Ave, Silverdale Close, Farmers Gate; Greenfield Drive and Cowslip Acres on December 17.

On December 18, the sleigh will come to Ashworth Way, Wallshead and St Andrew’s Way, followed by Littlehales Rd, The Dale, The Close, Greenvale, Pinewoods and Newtown on December 19.

On December 20, Santa and his elves will vist the pubs of Newport, and then will visit Edgmond. On December 21, Santa will be in the Market Square from 11am until 1pm, then in Lilleshall from 4pm.