Brave Telford soldier immortalised with road named in his honour

A brave soldier who died in the trenches of the First World War has been immortalised with a new Telford road bearing his name. 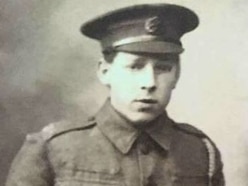 Ernest Dawes was killed in France in April 1918, with his death recorded in newspapers of the time.

Now the main road at a new development in Priorslee has been christened Ernest Dawes Avenue.

A report in the Wellington Journal noted that Mr Dawes joined the South Lancashire Regiment in October 1916 and had been in France for nearly eight months at the time of his death.

He went to war aged 19, after being educated in Oakengates. He also worked prior to the war at the Lilleshall Company at Priorslee.

His modern-day descendant Rachel Bentley said: "We are deeply touched to think that Telford & Wrekin Council is minded to honour these ordinary young men who were very much rooted in our local community.

The Wellington Journal entry of May 11, 1918, quoted Ernest’s officer: "He was doing his duty bravely in the trenches and met his death instantaneously.

Four nameplates bearing Mr Dawes' name have been erected along the road in Priorslee, meaning that everyone that passes along Castle Farm Way will see Ernest’s name.

Councillor Richard Overton, Telford & Wrekin Council’s cabinet member for neighbourhood services, said: "We were all touched by Ernest’s story and I am delighted that we are able to honour him by naming the road after him.”